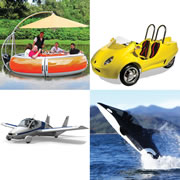 This is PT-728, a 67 year-old restored Patrol Torpedo Boat from World War II. With a keel laid on August 10, 1945, she is one of 12 remaining PT boats in the world. She is “armed” (all weapons are deactivated) with a single .50- and two twin .50-caliber Browning machine gun stations, an aft 20mm Oerlikon cannon, four tubes that each housed a Mark VIII torpedo, and two depth charge launchers. Built in the Annapolis Yacht Yard using a 72′ British Vosper design, her hard-chined, triple-ply mahogany hull is nearly flat at the stern, allowing her to “plane” on top of the water at speeds up to 42 knots, a necessity for quick getaways after a torpedo run. So compelling was a PT boat’s performance that Nelson Rockefeller converted one into a high-speed yacht for commutes between Albany and New York City. Updated with modern electronics, radar, and two turbo-charged diesel engines providing 1,100 total horsepower, she is the only PT boat in existence licensed by the U.S. Coast Guard for carrying passengers. Special conditions and guarantee limitations apply. Please call 1-800-227-3528 for details. 72′ L x 18′ W x 7′ 4″ H. (45 tons)u000Du000Au000Du000A