The Genuine 7 Foot Robby The Robot. 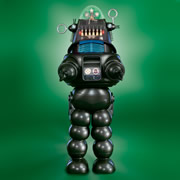 The Genuine 7 Foot Robby The Robot.
This is the special edition, life-size, fully animatronic remote-controlled version of Robby, the robot from the classic 1956 film Forbidden Planet. Standing 7′ tall, Robby is created from the same blueprints, molds, and templates used to create the original movie-prop costume. Crafted by renowned artist Fred Barton, the man commissioned to restore the original robot after its sale to a Southern California prop museum in 1970, Robby’s body is constructed of rugged 100% Fiberglas retooled from the original robot, while his mechanisms are made from the finest machine-grade brass, acrylic, and aluminum to ensure lasting durability and quality. Robby arrives pre-programmed to move his computer relay assembly, rotate his servo-controlled head, spin his planetary gyro stabilizers, and twirl his scanners while his various lights flash exactly as seen in the film. A directional speaker housed in the head produce Robby’s distinctive voice in CD-quality sound as he delivers his famous lines from the original movie at your command from the included remote control – his voice even synchronizes with the retro-style bright blue neon tube lights built into his front. His integral audio system can connect to a home theater system and you can project your own voice through him with the included wireless microphone. Robby is signed and numbered by the artist, and officially licensed by Turner Entertainment. Certificate of authenticity included. Made in the U.S. Plugs into AC. Special conditions and guarantee limitations apply. 84″ H x 42″ Diam. (100 lbs.)