The Death of the Grown-Up: How America’s Arrested Development Is Bringing Down Western Civilization 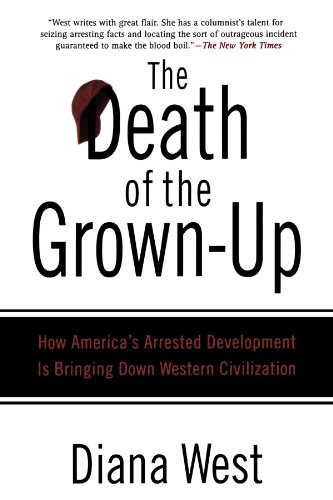 The Death of the Grown-Up: How America’s Arrested Development Is Bringing Down Western Civilization
“WHERE HAVE ALL THE GROWN-UPS GONE?” That is the provocative question Washington Times syndicated columnist Diana West asks as she looks at America today. Sadly, here’s what she finds: It’s difficult to tell the grown-ups from the children in a landscape littered with Baby Britneys, Moms Who Mosh, and Dads too “young” to call themselves “mister.” Surveying this sorry scene, West makes a much larger statement about our place in the world: “No wonder we can’t stop Islamic terrorism.  We haven’t put away our toys!” As far as West is concerned, grown-ups are extinct. The disease that killed them emerged in the fifties, was incubated in the sixties, and became an epidemic in the seventies, leaving behind a nation of eternal adolescents who can’t say “no,” a politically correct population that doesn’t know right from wrong. The result of such indecisiveness is, ultimately, the end of Western civilization as we know it. This is because the inability to take on t