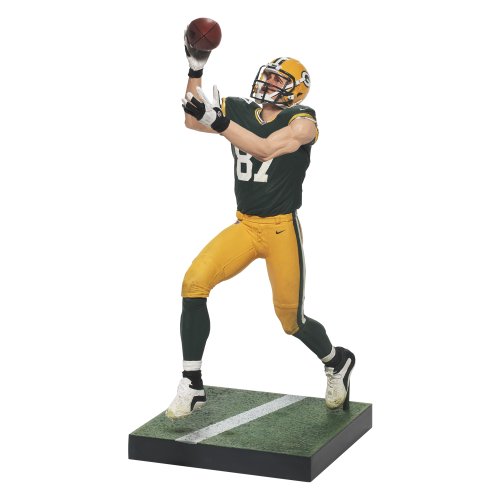 McFarlane Toys NFL Series 32 Jordy Nelson-Green Bay Packers Action Figure
NFL Series 32 offers up a wide mix of NFL superstar favorites, and some new faces never before seen in the SportsPicks universe. Robert Griffin III became the face of the Redskins organization and led them into the playoffs for the first time since 2007. RGIII will be featured in an all-new pose. Andy Dalton led the Bengals to the playoffs in consecutive seasons for the first time since the 1981-1982 seasons. Dalton will be wearing his black home jersey. Once again one of the best running backs in the NFL, Ray Rice helped lead the Ravens into the Super Bowl and take home the coveted Lombardi Trophy. Rice is featured in an all-new pose. Arian Foster, the best all-around running back in the NFL, can be seen wearing the white jersey and blue pants uniform combination of the Texans. Making their SportsPicks debut in 2013 are Vernon Davis, Andy Dalton, Antonio Brown and Jordy Nelson. Nelson and Brown are key young weapons for their teams and will only be getting better with time. Brown will