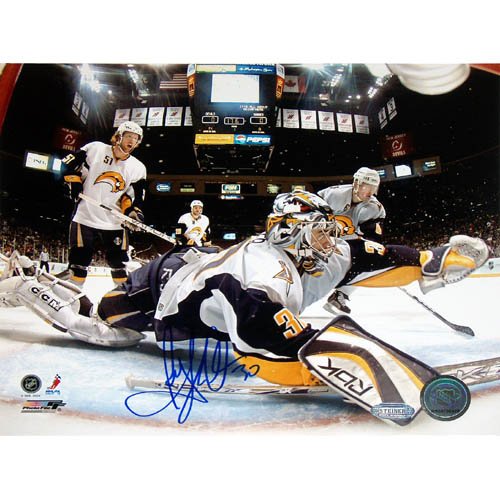 NHL Ryan Miller Goal Cam Glove Save Vs Devils Autographed 8-by-10-Inch Photograph
The Buffalo Sabres drafted Ryan Miller in 1999 using the 138th overall pick to secure the services of the talented young goaltender. Miller made his NHL debut on November 19 2002 when the Sabres met the New Jersey Devils at Continental Airlines Arena and he spent the next few seasons playing for both the Sabres and their AHL affiliate in Rochester. By 2005 Miller was the Sabres’ starting goalie and that year he led the team to a winning season and also the playoffs. Miller won 40 games in 2006 and once again took the Sabres into the playoffs. Ryan Miller has hand this Autographed 8×10 Photograph goal-cam graph of him making a save against the New Jersey Devils in NHL action on December 12 2006 at the Continental Airlines Arena in East Rutherford New Jersey. A Steiner Sports Certificate of Authenticity is included.